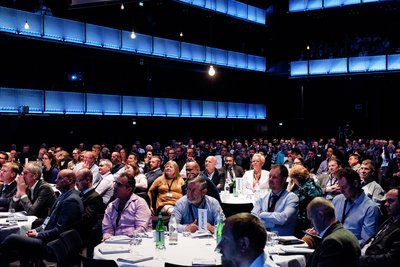 With almost 450 delegates from 45 countries, the 12th edition of AquaVision was successfully held in Stavanger, Norway, on 11-13 June.

Led by former Secretary General of the United Nations, Ban Ki-moon and Her Royal Highness Crown Princess Victoria of Sweden, a total 26 speakers inspired and motivated participants to discuss about the long-term vision of the aquaculture industry based on the Blue Revolution, a concept coined by The Economist magazine in 2003. In addition to salmon, this year’s conference also provided a wider overview on the development and opportunities for species such as shrimp and tilapia in growing areas such as Africa and Asia.

During his opening sp 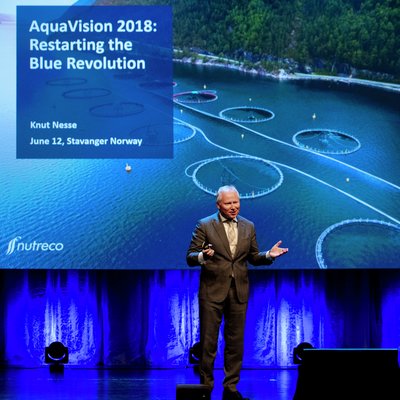 eech, Knut Nesse called the audience to think about what the Blue Revolution meant 15 years ago and how we can restart it through collaboration and innovation, two words that were constantly emphasised during the conference. He also highlighted the management of diseases as one of the main challenges that the industry is facing for its sustainable growth, but also mentioned positive initiatives like the Global Salmon Initiative (GSI), the Pincoy Project in Chile, the Seafood Business for Ocean Stewardship (SeaBOS), Aquacualture Stewardship Council (ASC), as well as the Sustainable Shrimp Partnership (SSP), an effort that was initiated after AquaVision 2016 by the Ecuadorian shrimp industry.

AquaVision 2016 was also the starting point for a group of young people working in the Norwegian industry that gathered together to discuss what the industry should work on to build trust and improve its reputation towards 2030. This year, Nina Grieg, Grieg Seafood’s Business Development Manager and Mads Martinsen, Skretting Norway’s Marketing Director, commented that collaboration should include a greater number of young people in decision making and recommended current leaders to participate more actively in the public debate in order to deliver more transparency, commitment and collaboration. 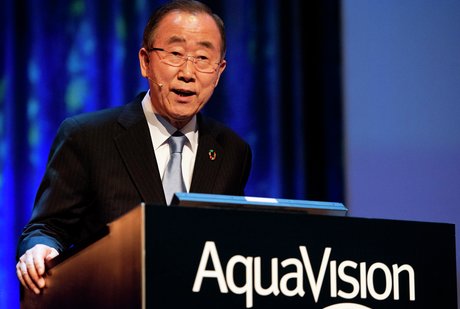 Ki-moon, whose focus was on three main areas: climate change, the necessity of achieving our Sustainable Development Goals (SDGs) and the need for scaled-up private sector participation to this end, and international efforts to ensure clean water and food security. According to the UN’s Food and Agriculture Organization (FAO), aquaculture is now the fastest-expanding sector of food production, accounting for more than 50 percent of the world’s fish that we consume. This directly combats overfishing, and helps enhance global food security and progress on the SDGs.

“Aquaculture has demonstrated impressive promise in combating food insecurity, helping to alleviate poverty, and improving diets, trade, and employment around the world,” said Ban Ki-moon. At the same time, he mentioned that aquaculture is laudably responding to changing global trends including climate change, the state of our oceans, population growth and urbanisation, and applauded the driving sense of social responsibility in pursuing growth and profit in step with the international community’s collective efforts to achieve sustainable development and reduce our carbon footprint.

Ban Ki-moon also encouraged participants in AquaVision to take more responsibility for the oceans referring to a UN’s new report that unveiled on the detrimental effects of plastics in marine life and environment explained by more than eight million tons of plastic that are dumped into the oceans each year. “If these trends continue, the report warns that by the year 2050 there will be more plastic than fish in our oceans.”

During his speech, Ban Ki-moon invited the audience to expand the boundaries and “think, live, work and dream globally. If you can do this, and I am certain that you can, our world will continue to make great strides and flourish in the many years to come.” 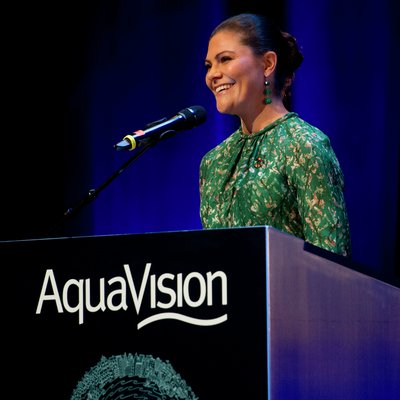 The last day of AquaVision focused on how collaboration between keystone actors has the potential to transform the global seafood system. A clear example of that is SeaBOS, an initiative that for the first time connects the global seafood business to science, wild capture fisheries to aquaculture, and European and North American companies to Asian companies with the ambition of leading a global transformation towards sustainable seafood production and a healthy ocean, thus contributing to the United Nations Sustainable Development Goals (SDGs), and in particular Goal 14 – Conserve and sustainably use the oceans, seas and marine resources.

Her Royal Highness Crown Princess Victoria of Sweden, an active supporter and participant of this initiative, asked attendees to work closely together for the production of sustainable and healthy food coming from healthy oceans. She also explained that business teaming up with science can be a powerful driver of change.

“I’m glad to see you taking action for a sustainable seafood industry, finding new solutions that are both innovative and commercially viable”, Princess Victoria said. “Representatives of the aquaculture industry, your business is and will be crucial in feeding the world’s growing population, we need you, and for this we need healthy oceans.” 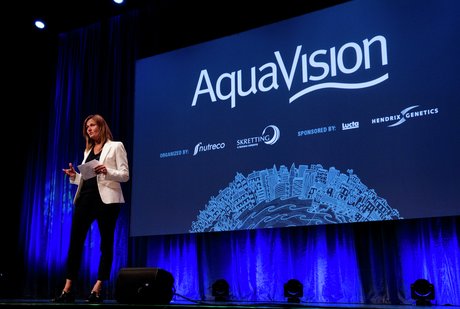 “In the fight against poverty, inequality and climate change, the global goals for sustainable development are inspiring tools, but let’s not forget, the goals by themselves don’t change the world. People do. You do”.

The conference was closed by Therese Log Bergjord, CEO of Skretting, with an invitation to reflect on the most important topics discussed during the three days and how aquaculture should innovate and collaborate for a sustainable growth. “We have made so much progress, yet we still have so much more to do. Let’s embrace change, keep moving and work together to feed the future by producing healthy and safe proteins that meet the demands of growing population.”