Aquaculture’s impact on food production in recent decades has been nothing short of remarkable. Aligned with the rising demand for healthy proteins from a fast-growing global population, it is one of the fastest-growing animal-food sectors, and is expected to provide 110 million tonnes of products by 2030, almost all of which will go directly to human consumption.

This is a quantum leap from where the industry was in 1981, when I joined Skretting. Back then, Norway’s salmon farmers were producing just 5,000 tonnes of fish a year. And while there was plenty of ambition, the notion of farming the volumes we are now accustomed to would have been science fiction.

The industry’s meteoric rise has not always been a smooth ride. For instance, towards the end of the last century, as the aquaculture volumes grew and the use of marine raw materials as fish feeds increased, so we were the subject of intense scrutiny from the environmental community and campaign groups.

They were questioning, for example, how much wild fish was being used to produce a farmed fish. They also feared where this consumption-growth trend might lead.

"Skretting has always had a sustainability agenda

While there might be a case for saying that this outside opposition helped shape modern-day aquaculture, putting it on a more responsible trajectory, the fact is that as an organisation, Skretting has always had a sustainability agenda. From the outset, the efficient use of resources has been a core part of our business.

We have constantly sought to use feed raw materials in such a way that we can produce the most amount of feed possible to in turn generate the largest food volume possible. At the same time and part of the same rationale, we have focused on lowering feed conversion, maintaining and improving fish health where possible so that essential food is not lost through unnecessary mortality events.

These sustainability ambitions have always been with us; they are part of the Skretting DNA, and have led to some of our most prolific R&D programmes and innovative solutions.

Today, for example, we have the ability to be completely independent of marine resources like fishmeal and fish oil should fish farmers and supply chains require it.

"We have also established strict sourcing criteria on all of our raw materials. Through our mandate to know where every single feed ingredient comes from and that we only buy from responsible sources, we have developed increasingly sophisticated verification methods.

Quite simply, if a product or supplier fails to meet these thorough evaluations, we don’t purchase from them. Of course, that doesn’t mean that everything is completely in order today. There is still more that can and will be done, but compared to many other food production areas, these and other sustainability-focused actions have ensured that the aquaculture industry has come a long way.

As our business has grown and diversified – moving beyond salmon to more than 60 different aquaculture species, and encompassing many new geographies – the complexity of our vision to feed a population of 9 billion people in 2050 has become much more apparent.

While we have taken great pride in our ability to overcome challenges through sustainable solutions in the past, it is clear that on a global scale, we cannot do this alone.

We have moved into a new dimension, one where collaboration is fundamental to purposeful progress. We are therefore committed to working with other lead actors and allies in the value chain to ensure aquaculture globally moves forwards, achieving higher standards, providing essential food and livelihoods in the most sustainable manner possible. At the heart of these actions will be our three areas of sustainability: health and welfare, climate and circularity, and good citizenship. 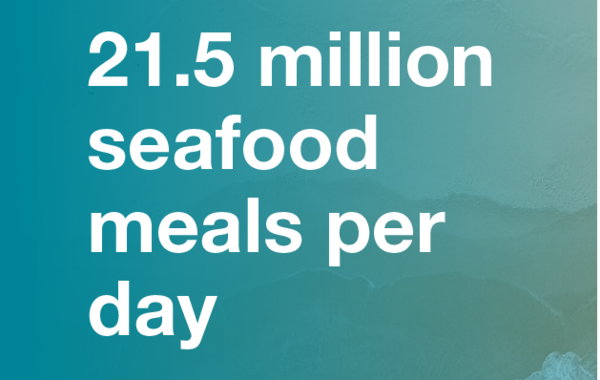 3. Putting it into context

Comprising a diverse range of species and products, today’s seafood supply chains provide essential nutrition to billions of people around the world.

Introduction 1. From our CEO 2. Our ambitions 3. Putting it into context 4. Transparency & trust 5. The footprint of feed 6. The footprint of our operations 7. Caring for people 8. Human rights 9. Caring for community 10. Planetary challenges 11. Deforestation 12. Committed to the ocean 13. The origin of our ingredients 14. Responsible sourcing 15. Innovation and sustainability 16. Nutritional solutions launched in 2019 17. About Skretting