3. Putting it into context

Comprising a diverse range of species and products, today’s seafood supply chains provide essential nutrition to billions of people around the world.

In addition to being the principal source of long chain omega-3 fatty acids, which are central to human health and development, these foods also provide crucial minerals such as calcium, phosphorus, zinc, iron, selenium and iodine, as well as vitamins A, D and B, and vital amino acids like lysine and methionine. We’ll touch on this a bit further in the report.

It is widely accepted that even consuming small quantities of seafood can have a significant positive nutritional impact for people of all ages. These health benefits, along with population growth, rising incomes and increased urbanisation have resulted in a strong global consumption trend. According to the Food and Agriculture Organization of the United Nations (FAO), people have never consumed as much fish as they do today. The FAO’s most recent data finds that the world consumption has doubled since the 1960s to an estimated 20.5 kg per capita in 2017, and also that the annual global growth in consumption has risen at twice the rate of the population’s expansion every year for the last 40 years.

The plateauing of wild-capture fisheries has put a strong onus on aquaculture to meet most of the market’s increasing need for seafood products. Again, the FAO has evidenced that the industry is rising to the challenge and growing faster than any other major food production sector. Indeed, the human consumption of farmed fish and shrimp has already eclipsed that of products from wild fisheries and it is projected that by 2030, 60% of the seafood we consume will be farm produced, based on a total global harvest of 110 million tonnes.

At Skretting, we believe there is much more than can be achieved. Despite the clear growth trends, fish and shellfish account for only 7% of the proteins consumed worldwide, while just 2% of all the food that we eat comes out of the sea. This is despite our oceans covering more than 70% of the Earth’s surface. Therefore, as we look ahead to the challenge of providing 9 billion people in 2050 with a healthy diet that is produced within planetary boundaries, aquaculture is uniquely placed to be one of the most productive and sustainable food systems for people and planet.

Skretting and the SDGs

In 2015, the United Nations introduced a set of 17 Sustainable Development Goals (SDGs) to end poverty, protect the planet, and ensure prosperity for all as part of a new sustainable development agenda. Each goal has specific targets to be achieved by 2030. For the goals to be reached, everyone has a part to play: governments, the private sector, civil society and engaged people like the readers of this report. We believe that in many areas, our sustainability programme is aligned with the SDGs. For example, our mission of ‘Feeding the Future’ is firmly aligned with fulfilling goal number 2: End hunger, achieve food security and improved nutrition and promote sustainable agriculture.

Nuterra is a global sustainability programme implemented across Nutreco, highlighting our dedication and commitment to sustainability. To a large extent, our sustainability report describes how we work and what we have achieved to support the United Nations in its effort to establish a new sustainable development agenda. The present SDGs are based on our current sustainability roadmap which was created several years ago for the lead up to 2020. We are now in the process of developing our 2025 roadmap which will determine our directions for the years ahead. 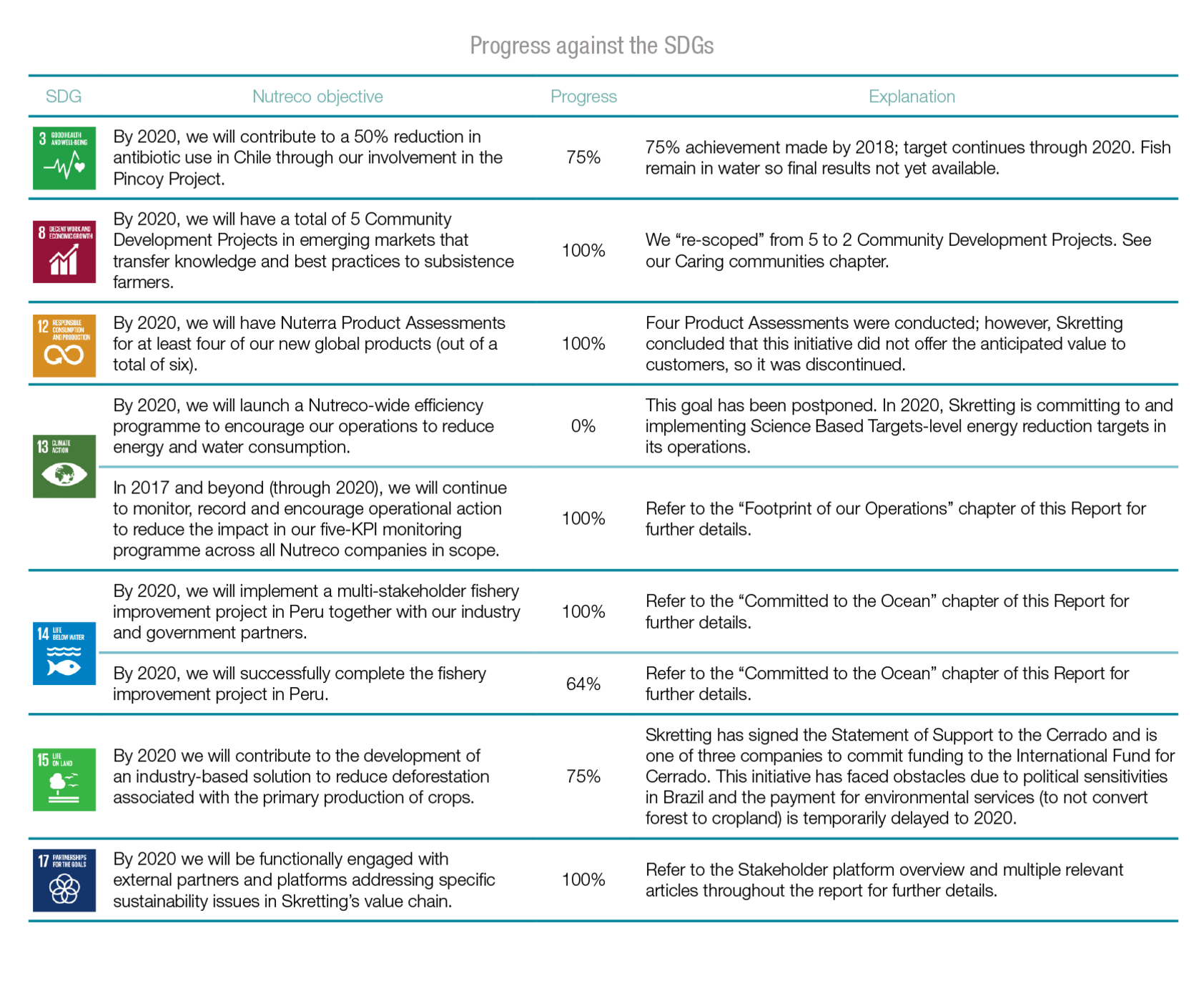 Seafood has an important role to play in human nutrition. With population growth and economic development there will be increasing demand for seafood as part of a healthy diet.

Introduction 1. From our CEO 2. Our ambitions 3. Putting it into context 4. Transparency & trust 5. The footprint of feed 6. The footprint of our operations 7. Caring for people 8. Human rights 9. Caring for community 10. Planetary challenges 11. Deforestation 12. Committed to the ocean 13. The origin of our ingredients 14. Responsible sourcing 15. Innovation and sustainability 16. Nutritional solutions launched in 2019 17. About Skretting