It's not just what we aspire to do, it's what we do.

The total volume of fish consumed worldwide has grown considerably over the past couple of decades, resulting in a near doubling of the global per capita consumption. This transformation has been made possible by the rapid development of aquaculture.

Fish also has an important role to play in human nutrition. As such, population growth and economic development will increase the demand for fish as part of a healthy diet. Even when consumed in small quantities, fish represents a nutritionally important part of many people’s diets, particularly in developing countries. It is a vital source of protein and micronutrients, and improves the quality of protein in largely vegetable and starchbased diets by providing essential amino acids.

Fish is rich in zinc, phosphorus, magnesium, selenium, and contains vitamins  D and B2 (riboflavin), while marine fish is a good source of iodine. Many of these vital nutrients are only found in small amounts, if at all, in staple foods such as maize, rice and cassava which make up the bulk of people’s diets in developing countries. Fish are an indispensable source of these nutrients for many people, and small low-value fish, which are largely consumed by the rural poor, provide more minerals than the same quantity of meat or large fish, as they are consumed whole, with the bones intact. Fish also contain fatty acids that are essential for the development of the brain and body, and are particularly crucial for the diets of babies, children, and pregnant and lactating women.

Consumption of omega-3 fatty acids during pregnancy reduces the risk of low birth weight, which is a key factor in both maternal and child mortality. These acids are also critical for the neurological development of infants, and are found almost exclusively in fish, making the consumption of fish during lactation and pregnancy especially important. 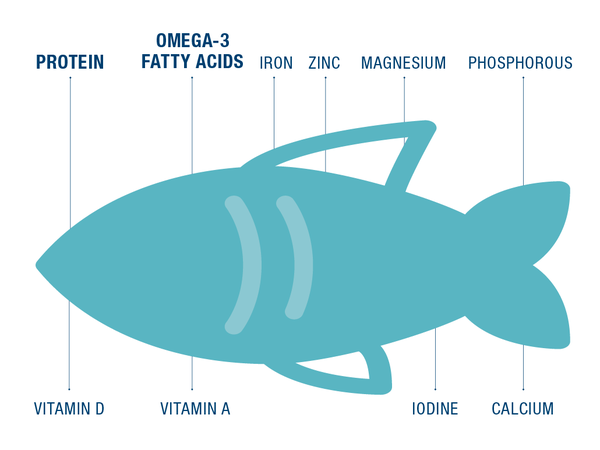 FISH IN HUMAN NUTRITION AND THE UN SDGS

Fish as food make an important contribution to the SDGs. While the most obvious contribution is in terms of food security and nutritional security, it also has an important nutritional role in reducing child mortality, improving maternal health, and health in general. Fish also contribute indirectly to several of the other SDGs through improved nutritional status and enhanced livelihoods, and to gender equality through women often being employed in aquaculture production and processing of fish and shrimp.

Sustainability report 2018 introduction
Take me back

How we contributed towards the UN SDGs in 2018
Read more

Learn more about who we are and what we do.
Read more

Products, services and digital tools to boost productivity
What we did in 2018

Nutritional composition of feed ingredients
What we did in 2018

Engaging with internal and external stakeholders
What we did in 2018