19.10.2018
Skretting Norway’s factory in Averøy has produced commercial salmon feed with insect meal for the first time. Nordlaks is the first customer to test the feeds containing insect meal, with 360,000 fry receiving this pioneering feed.

"We expect it to be as good as our regular feed and hope that the commercial test will show the same good results as Skretting has seen in its efforts to improve feed intake," says Eirik Welde, freshwater director in Nordlaks.

Insect meal offers an alternative to fish meal and soya, and Siri Tømmerås, responsible for feed for land-based farming in Skretting Norway, explains results from experiments where the fish show the same growth performance with feeds using insect meal as with traditional protein sources. "Insects are an important food for the wild salmon, and we see that insect meal can increase the appetite in the fish. This is an interesting find, and we continue to take advantage of this, says Tømmerås.

Skretting believes insect meal will be an important raw material in the future and is helping producers scale up production. Skretting says that they have the knowledge to do this and have chosen to do so due to the belief that insect meal will be an important protein source for aquaculture feeds moving forward. "The challenge has been to find manufacturers that can produce enough volume with consistent, good quality. We have seen more than thirty manufacturers, and ended up with a handful of suppliers that we have moved on. After a close cooperation for a long time, we have now obtained the raw material at a quality level that we can count on in the future, says Tømmerås.

Consumers are positive when they see the sustainability story 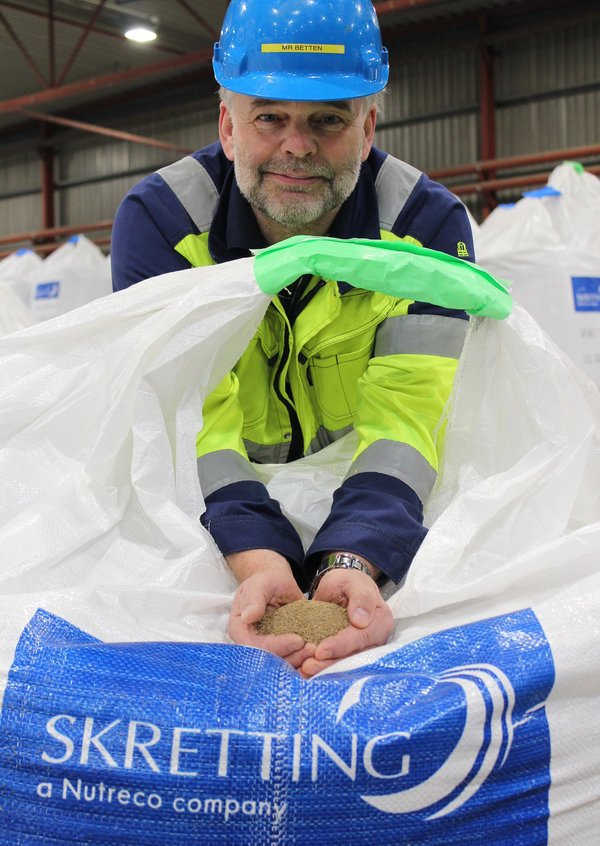 The feed produced by the Skretting Norway factory contains insect meal made from the larvae of the black soldier fly - an EU-approved commodity. Surveys show that Norwegian consumers are more positive to eating salmon that has had insect meal in the feed than other Europeans.

"People who have grown up near a salmon river know that insects are natural foods for the salmon. People who have not thought so much about what a salmon eats is positive to insect meal when they hear that this is a good and sustainable raw material,” Welde says.

Industrial production of insect meal must be increased

In the European market, there is now little available insect meal for use on a large scale, and Skretting is working with manufacturers who wish to come up at a commercial level. Ideally, by 2022 there will be at least five different European suppliers, each producing 20,000 tonnes of insect meal per year. That is, two thirds of the amount of soybean concentrate Skretting Norway uses today.

"Our goal is that in the future, ingredients used for aquaculture feed do not compete with food for human consumption. For us it's important to invest in alternatives like insect meal," says Mads Martinsen, Skretting Norway's Product Development Director, who has several new commodity projects in progress.

Other new raw materials in the pipeline

"Insect meal seems to taste good for the salmon, which in nature is used to insects. We are also currently testing the plankton Calanus which is a natural part of the wild salmon diet. When we explore further down the food chain, in fact, the Nordic waters have as much Calanus as the total biomass of all wild fish and sea mammals combined. The authorities have opened for regulated fishing, and Skretting is already commencing commercial trials with Calanus. Initial results show that salmon also like the taste of this plankton, so here we have a fantastic new resource in addition to insect meal," says Martinsen.

Magne Betten at Skretting Norway’s factory at Averøy shows the insect meal that
was used for the first time in a commercial feed. Nordlaks are now testing
the feed containing insect meal with 360,000 fry. (Photo: Marit Storvik Folland)